Just added to your cart

A BRIEF HISTORY OF A HANDBAG

Handbags have been around for thousands of years ever since men had something valuable to carry. They evolved simultaneously with fashion and cultural norms. Let's take a short trip down the history lane of our beloved accessory, which is also, in a way, a history of women's liberation and independence.

Did you know that handbags started as a man's accessory? Yup, it's true. From Ancient Egypt hieroglyphics depicting men carrying pouches around their waists to the late 17th century, men were the ones who carried bags. Even the term 'handbag' itself, which was first popularised in 1900, was a term for a man's hand luggage.

For thousands of years, bags were merely practical objects. Our earliest ancestors used bags made from animal skins and plant fibres to carry hunting and gathering tools.

It was in the Middle Ages when bags first became a fashion accessory. Bags became a form of self-expression and portable canvases showing the bag maker's craftsmanship. People began carrying drawstring pouches embellished with ornate embroidery and jewellery. Men of high social status showed off their wealth with a luxurious purse tied to their waist.

The first courier service began in Renaissance Italy, and messengers used sturdy bags made from tooled leather to carry papers and money between banks. Around 1497 Leonardo da Vinci tried his hand at fashion design and sketched an elaborate leather bag. In 2012, as a tribute to the city of Florence, the fashion house Gherardini brought Leonardo's bag to life and named it "La Pretiosa" (meaning Precious). Click here to see how La Pretiosa was made.

Beautiful, right? But Leonardo's bag was not designed for women. At that time, men generally carried money in a pouch made from cloth or hide and attached to a waist belt. Women wore drawstring purses as a fashion item or receptacle for small items. Grooms would give brides bags with embroideries that depicted love stories and poems as wedding gifts. They hung on drawstrings from women's girdle with items such as pomade or rosary. These were predecessors of the chatelaine, a decorative belt hook or clasp worn at the waist with small sewing tools, watches, and other objects, suspended from chains.

During the 16th and 17th centuries, fashion changed dramatically, and women started wearing extensive dresses that had a lot of fabric. They could not wear their girdle pouches on the outside of their clothing anymore because they would get tangled in their dresses. Instead, they wore girdle pouches under their skirts. These later led to the invention of pockets.

At the same time, men's fashion also changed and with that the pouches they carried. When pockets were invented around 1670, men no longer had to carry a purse strapped to a girdle. They still carried smaller pouches to hold their money. These later evolved to become wallets.

But not everyone wore small pouches. Lower classes, peasants and travellers carried messenger bags and larger satchel-like bags worn across the body known as the sacks. These were better suited for carrying larger items and were purely utilitarian bags.

In the 18th century, fashion once again changed. The discovery of the ancient city of Pompeii led to a fascination with sleek and slender designs. As a result, women were wearing slimmer and narrower dresses under which they could no longer carry girdle pouches. The purse had to be re-invented. During this time, women began wearing slender purses with a wrist strap called reticules or indispensables. 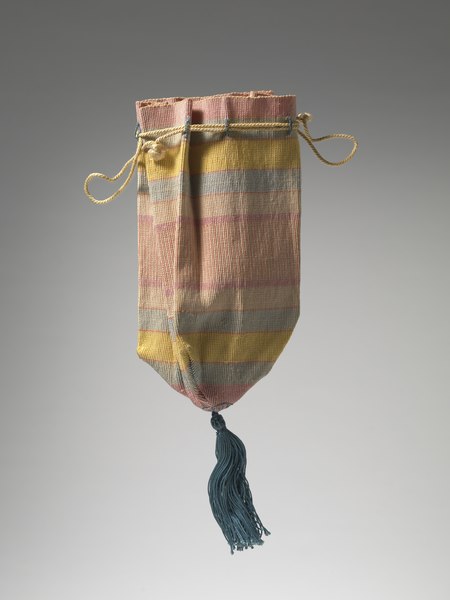 Not only did the bags convey the social status and identity of the wearer, but they also revealed how much freedom one had to move in society. The earliest bags were carried exclusively by wealthy men as they were more likely to venture outside of the home. As women were at home, there was no need for them to carry bags.

By the end of the 19th century, with the introduction of public train travel, women began socialising and travelling across the sea and land more independently. The purse became a real symbol of female emancipation.

Besides large pieces of luggage that porters carried, women needed smaller bags to keep tickets, papers, and money. Luggage designers like Louis Vuitton began to fashion utilitarian bags that were essentially miniature suitcases with sturdy handles, multiple compartments and snap closure. The portmanteau bag was ideal for travelling and became very popular with doctors too. And with that, the handbag as we know it was born. 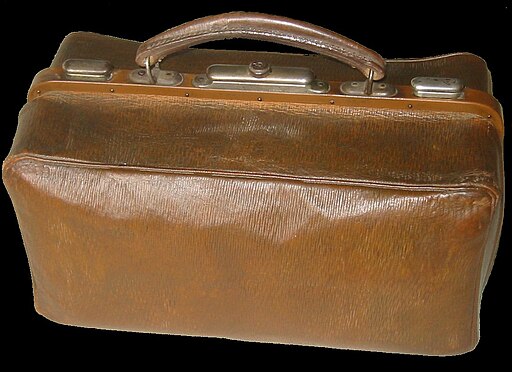 According to Anna Johnson in Handbags: The Power of the Purse:

Unlike a flimsy mesh reticule or a decorative coin purse sealed by a string, this bag snapped shut, and for the first time, women could carry their things with some degree of privacy. Men, who had long carried a lady's fan or her money, were supplanted by increasingly practical, brilliantly structured bags, and they have been mystified and excluded by the handbag ever since.

As the years progressed, handbags became an important part of women's daily lives, reflecting both their lifestyles and the culture they lived in.

The 20th century was the most innovative period for handbags. As women began stepping into society more and more, designers started creating larger bags to carry all their necessities for the day.

In the 1950s, when Hermes named a bag after Grace Kelly, the it-bag was elevated to a luxury item status.

In the 1970's we come full circle. Men once again started carrying handbags, often referred to as a man-purse or murse. These have a more masculine look to them and are larger in size, allowing men to carry more items with them.

Nowadays, bags are made from any material imaginable. Both men and women carry their bags over their shoulders, in their hands or under their arms to store all their necessities of modern life.